Spicy Carrot Salad and the Story Of My Cilantro 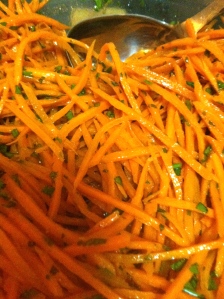 This recipe came from Cooking Light magazine. It’s a perfect addition to a fall meal. It brightens up the plate and has a great flavor.

All of the herbs came from my garden. However, the cilantro was special. A few months ago in the heat of summer, I was frustrated that my cilantro kept bolting. I decided to let it flower and turn to seed so I could make my very own coriander seed. Once the plants got to the right point (for us, the right point was when we were sick of the constant swarm of bees who adored our cilantro flowers), I cut and then dried the plants in a paper bag. Then, I hung the bag inside for a few weeks. After a few weeks, I gave the bag a few shakes. Amazingly, there were some coriander seeds at the bottom of my bag. However, the yield was less than I hoped for: just a few tablespoons. I think I should have waited a bit longer to chop down the flowering cilantro before letting it dry.

Rather than save the coriander, I continued on with my experiment. I planted the coriander a few inches deep in the empty pot that used to house the cilantro. A few week later….little baby cilantro plants started popping up. I watered them gently at first. A few weeks later than that…carrot salad with a hit of heat features my very own “circle of life” cilantro. I know this is basic stuff to some people, but I was amazed that this process actually works.