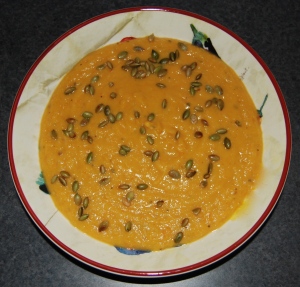 I love roasted butternut squash soup. This one stands out because of the other flavors involved: apples, hint of chili, rosemary, coriander, and of course cream. It’s also fairly easy because pretty much everything just roasts together for the same amount of time.

I altered this recipe from NPR, (which originally was a Jamie Oliver recipe)  just a little bit. They suggested putting the pumpkin seeds in the oven alongside the vegetables for 10-15 minutes, but that resulted in black, smelly pumpkin seeds. Instead, I just toasted them on a skillet for a few minutes, stirring a few times to make sure they got evenly browned.