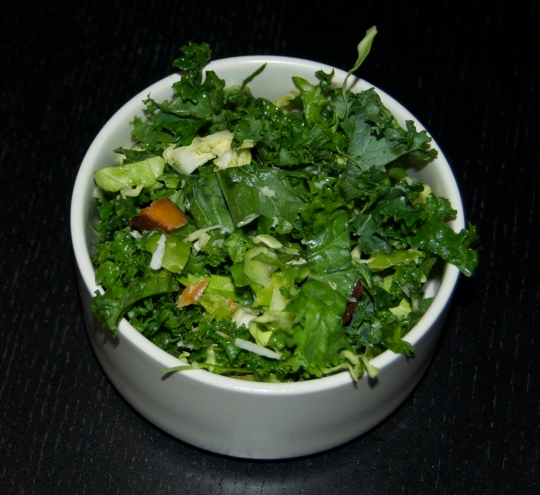 This Epicurious recipe is a great way to use the vegetables you can find at the Farmer’s Market even after a week of below freezing temps. Thanks to LF for bringing this over for brunch and then leaving the leftovers so I could have it for dinner, too. It went well with a vegetable frittata and sourdough bread. Although this recipe calls for Tuscan, you can use any kale that is available.

I can’t get enough Brussels sprouts. Although my go-to recipe is Brooklyn Brussels Sprouts (which I posted almost exactly one year ago), I was looking for a variation. I like this one because it requires no cooking. This recipe came from Food and Wine magazine. If you use the shredding attachment on your food processor, it can be made very quickly. What’s also nice is that you can make this a day in advance. The recipe in Food and Wine called for salted roasted sunflower seeds. I only had raw unsalted seeds, so I just toasted them on a skillet for a few minutes and added a bit of salt before folding the seeds into the slaw. 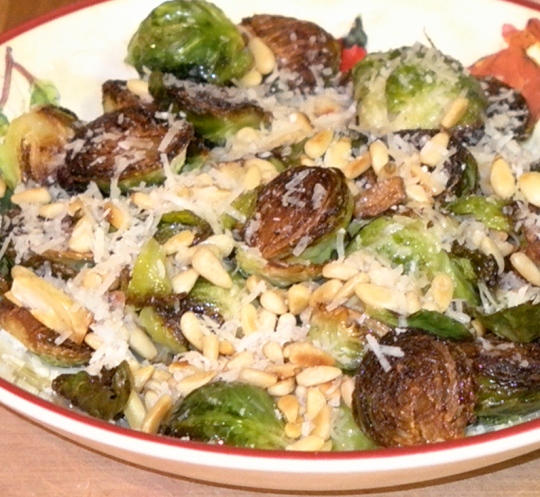 Hide your alfalfa…This recipe might make all other sprouts jealous.

GQ just named Brooklyn the coolest city on the planet (the whole PLANET, people), which is exciting because I did not realize that our borough had become an independent city once again. Also, I have a good feeling that this eponymous recipe will really catch on since the “city” I call home was given this honor by the same magazine that has articles which explain, “How to Dump Her Like a Man.”

I got the method for this recipe from Mark Bittman’s How To Cook Everything Vegetarian. A few changes: he calls for balsamic vinegar, which I omitted. Also, I added the pine nuts and parmesan, and sliced the garlic (he suggested leaving the garlic cloves whole).